The world changes and we adapt. The world also stays the same and we achieve homeostasis within our small segment of the world. It is a dance we find ourselves dancing every day as we move forward with life.

I’ve been part of a wonderful study group focusing on ethics in Artificial Intelligence, MKAI. I know infinitesimal little about artificial intelligence. I am not an ethicist and what I know is a little book learning from school, what has been taught to me by my family and friends, what has been modeled by others, what culture has taught me and by my own experiences as I deal with life. Although my knowledge is limited, I know I am impacted by both. So part of my responsibility is to become educated so I have a better understanding, increase my awareness, perhaps learn some skills that can help me adapt more effectively, and make better choices.

I remember when escalators were first introduced in department stores, the reluctance/ hesitancy to step up on them, the learning curve, the accidents, the humor of the comedic errors that ensued, the number of high heel shoes that were caught and lost, or messed up with the system. Then mastery was achieved. It became common place, and no one now gives it much thought, unless you come from a distant place where you have had no exposure. With it we gain access quickly to the next floor, it makes life easier and reduces wear and tear of the knees of elderly and those who have difficulty with mobility. Among the unintended consequences we reduced our exercise, our stamina, and other health issues were impacted including weight gain. Just like when we introduced the electric typewriter, office workers gained weight, the energy spent pushing each individual key resulted in less calorie burning.

Many technologies that we have introduced including artificial intelligence have had an impact in our daily lives, our communities, in our culture, and the world at large. In our effort to make the world “easier” we are rushing, proclaiming the benefits of X, Y, or Z and selling it to highest bidder. Our collective data gathered, used and exploited.

Without thought we become invasive species in a foreign land like the introduction of rabbits in Australia without their natural predators to counterbalance. Or like forest gazelles who venture out of the forest to eat with those living in the open plains upsetting the balance of food sources for all because we have taken the fear factor/ vigilance away when we eliminated the hyenas from the area. Thus creating unevenness and famine for some. It was not until the reintroduction of the hyena that the natural balance was restored.

Making it “easier”, expedient, faster, favorable to one group or groups in the short term does not justify the price that we and Earth have to pay. Context matters, resources matter, cost ratio to what we do to the environment, humanity and other sentinel beings matter. Making the world “easier” for some at the expense of human suffering matters.

The premise of conquering is obsolete and deadly. It is arrogant and self-centred. We have opened Pandora’s Box and we can not go back, but what we can do is to steer the world of AI and other technologies away from a conqueror’s mentality to a collaborative stance, seeking harmony and parsimony with each other and the world. Stop depleting the Earth of the rarest of elements, asking nature to teach us, after all she has had more time to evolve than us, and we are but a product of it.

Facial recognition technologies that hurt minorities and have the potential of being misused by authoritarian regimes are doing more harm than good. Deciding the freedom of a human being based on algorithms created by those in privilege does more harm than good, the intention to serve communities or facilitate a process might be good, but the unintended consequences are devastating to those who suffer them.

Drones that self-direct and target kill, can easily be misused by unscrupulous governments and people. These and other examples have devastating consequences for those targeted, and I dare to say for humanity as a whole, as it dehumanizes us all. As the saying goes, hell is paved with good intentions. Don’t forget that all of us, given the right conditions, can become that target.

On the other hand, technologies can have intended impacts, and at the same time end up with unintended positive consequences. An example is a technology being tested in nursing homes in Japan, where there is a shortage of care workers. The device alerts the staff when one of the residents’ bladder is almost full and in need to be helped to use the bathroom. It was designed to increase the effective use of the staff’s time. With it more residents make it to the bathroom on time, reducing accidents. As a side effect, it reduced the number of infections, reduced the need for more frequent laundering, and most importantly it allowed the residents to preserve their dignity and remain more comfortable.

It is not clear what the unintended negative side effects are, perhaps the low level of ultrasound needed in the long run might create health problems. The more efficient use of personnel might keep some owners from hiring adequate amounts of staff. Perhaps it might affect the level of the patients own self-awareness about their need to urinate, in a cognitive detrimental way. Whether these unintended consequences have been considered in the trial study was not clear to me.

The point of the above example is to try to find examples where the benefits for the population go beyond those intended by the intervention. As when placing an after school study group in a low income housing complex, resulted not only in better school performance for the kids, but fewer police calls of domestic altercations within a family and/ or neighbors. Or when helping high risk mothers connect with their infants, resulted not only in better parenting, but an increase in self esteem, and school enrollment for the parents. The unintended positive consequences benefited the targeted individuals, the families and the community at large.

Nature collaborates, educates, anticipates, sets boundaries, it feeds, shares, restores, provides, signals, and creates an infinite number of adaptations, each not only serving the particular species but the whole ecosystem. If AI follows the path of Nature, collaboration, sustainable regeneration, limit setting, communicates, uses information, responds to diverse environments and adapts accordingly to their ecological context we will be in balance, in harmony, rather than on the collision course that we are now.

Technology is not going to save us from ourselves if we continue to use a model of exploitation, of incomplete, biased and misguided data to predict outcomes and to generalize their use beyond the scope for which they were designed. It is like venturing to parts unknown and expecting to determine causation and truth in our actions, when all data we have to make our prediction of success comes from the holiday experiences of people back home.

The scope and the reach of what we are doing if we proceed without ethical guidelines, to accelerate the development of AI technology without looking at impact and its unintended harmful consequences, we are, for all practical purposes playing Russian roulette, while forcing others impacted by our decisions to play with us.

AI is our brain child, we created it. It is mobile, exploring and expanding. How are we going to guide it? What do we need to teach it? What ethical guidelines are we going to set for it? What limits will keep it, and us safe? Who is part of the village that is going to raise it? Where is the diversity it needs in its learning journey? Etc. Just like Hope remained in Pandora’s box to help humanity, are we going to make sure that hope for humanity prevails through empathy, compassion, responsibility, care, sustainability, boundaries, ethics, accountability, regeneration, and love; or let it escape with its unintended fatal consequences?

The future is now, what is our choice? 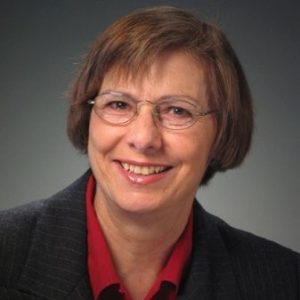 Ana Maria Irueste-Montes PhD, PCC, BCC is a personal and executive coach who works with clients to help them grow and transform.
Individuals, micro and small businesses, and entrepreneurs can all benefit from her coaching services. Her top organizational values are diversity, sustainability, and connection.
She is also an adjunct faculty member at the College of Executive Coaching, a certified school who trains and certifies coaches all over the world.

Bilingual, as well as bicultural. A lifelong learner who has been accepted as a student by the MKAI community.
Committed to upholding the best qualities of humanity through respect, ethics, gratitude, and compassion.
Otherwise, you'll find her having fun as a grandmother, writing poetry when the muse inspires her, laughing with friends, and admiring nature.