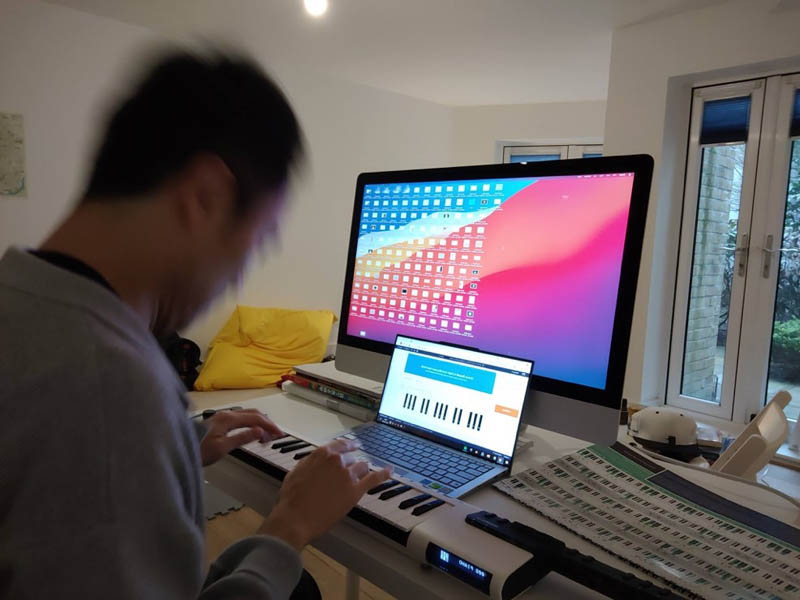 AWS is excited to announce the winner of the AWS DeepComposer Chartbusters Keep Calm and Model On challenge, Nari Koizumi. AWS DeepComposer gives developers a creative way to get started with machine learning (ML) by creating an original piece of music in collaboration with artificial intelligence (AI). In June 2020, we launched Chartbusters, a global competition where developers use AWS DeepComposer to create original AI-generated compositions and compete to showcase their ML skills. The Keep Calm and Model On challenge, which ran from December 2020 to January 2021, challenged developers to use the newly launched Transformers algorithm to extend an input melody by up to 20 seconds to create new and interesting musical scores from an input melody.

We interviewed Nari to learn more about his experience competing in the Keep Calm and Model On Chartbusters challenge, and asked him to tell us more about how he created his winning composition.

Nari currently works in the TV and media industry and describes himself as a creator. Before getting started with AWS DeepComposer, Nari had no prior ML experience.

“I have no educational background in machine learning, but I’m an artist and creator. I always look for artificial intelligence services for creative purposes. I’m working on a project, called Project 52, which is about making artwork everyday. I always set a theme each month, and this month’s theme was about composition and audio visualization.”

Nari discovered AWS DeepComposer when he was gathering ideas for his new project.

“I was searching one day for ‘AI composition music’, and that’s how I found out about AWS DeepComposer. I knew that AWS had many, many services and I was surprised that AWS was doing something with entertainment and AI.”

Nari at his work station.

Nari saw AWS DeepComposer as an opportunity to see how he could combine his creative side with his interest in learning more about AI. To get started, Nari first played around in the AWS DeepComposer Music Studio and used the learning capsules provided to understand the generative AI models offered by AWS DeepComposer.

“I thought AWS DeepComposer was very easy to use and make music. I checked through all the learning capsules and pages to help get started.”

For the Keep Calm and Model On Chartbusters challenge, participants were challenged to use the newly launched Transformers algorithm, which can extend an input melody by up to 30 seconds. The Transformer is a state-of-the-art model that works with sequential data such as predicting stock prices, or natural language tasks such as translation. Learn more about the Transformer technique in the learning capsule provided on the AWS DeepComposer console.

“I used my keyboard and connected it to the Music Studio, and made a short melody and recorded in the Music Studio. What’s interesting is you can extend your own melody using Transformers and it will make a 30-second song from only 5 seconds of input. That was such an interesting moment for me; how I was able to input a short melody, and AI created the rest of the song.”

The Transformers feature used in Nari’s composition in the AWS DeepComposer Music Studio.

After playing around with his keyboard, Nari chose one of the input melodies. The Transformers model allows developers to experiment with parameters such as creative risk, track length, and note length.

“I chose one of the melodies provided, and then played around with a couple parameters. I made seven songs, and tweaked until I liked the final output. You can also export the MIDI file and continue to play around with parts of the song. That was a fun part, because I exported the file and continued to play with the melody to customize with other instruments. It was so much fun playing around and making different sounds.”

Nari found competing in the challenge to be a rewarding experience because he was able to go from no experience in ML to developing an understanding of generative AI in less than an hour.

Nari is excited to see how AI will continue to transform the creative industry.

“Even though I’m not an engineer or programmer, I know that AI has huge potential for creative purposes. I think it’s getting more interesting in creating artwork with AI. There’s so much potential with AI not just within music, but also in the media world in general. It’s a pretty exciting future.”

By participating in the challenge, Nari hopes that he will inspire future participants to get started in ML.

“I’m on the creative side, so I hope I can be a good example that someone who’s not an engineer or programmer can create something with AWS DeepComposer. Try it out, and you can do it!”

Congratulations to Nari for his well-deserved win!

Paloma Pineda is a Product Marketing Manager for AWS Artificial Intelligence Devices. She is passionate about the intersection of technology, art, and human centered design. Out of the office, Paloma enjoys photography, watching foreign films, and cooking French cuisine.