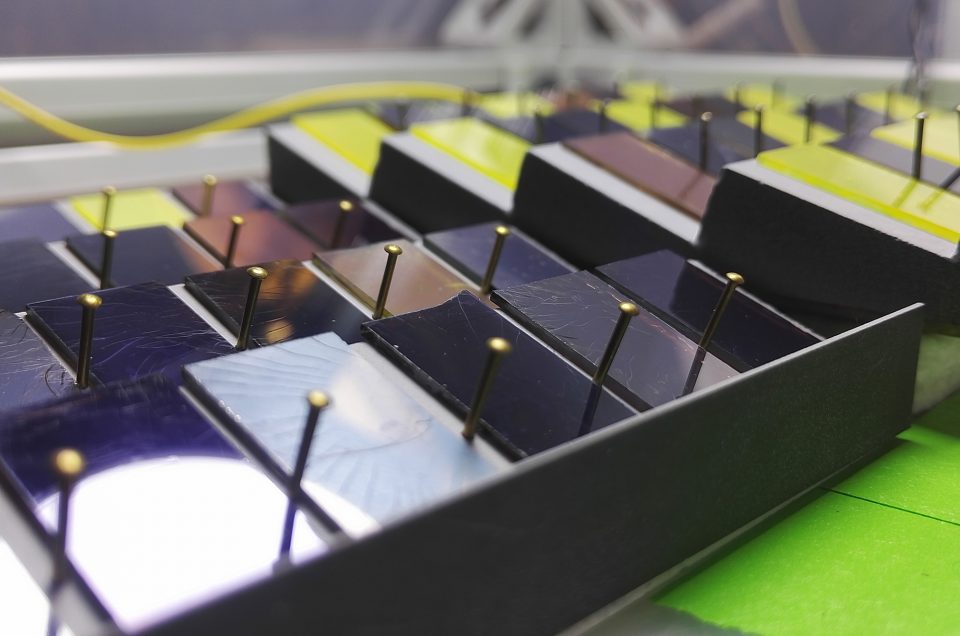 Materials called perovskites are widely heralded as a likely replacement for silicon as the material of choice for solar cells, but their greatest drawback is their tendency to degrade relatively rapidly. Over recent years, the usable lifetime of perovskite-based cells has gradually improved from minutes to months, but it still lags far behind the decades expected from silicon, the material currently used for virtually all commercial solar panels.

Now, an international interdisciplinary team led by MIT has come up with a new approach to narrowing the search for the best candidates for long-lasting perovskite formulations, out of a vast number of potential combinations. Already, their system has zeroed in on one composition that in the lab has improved on existing versions more than tenfold. Even under real-world conditions at full solar cell level, beyond just a small sample in a lab, this type of perovskite has performed three times better than the state-of-the-art formulations.

The findings appear in the journal Matter, in a paper by MIT postdoc Shijing Sun, MIT professors, Moungi Bawendi,  John Fisher, and Tonio Buonassisi, who is also a principal investigator at the Singapore-MIT Alliance for Research and Technology (SMART), and 16 others from MIT, Germany, Singapore, Colorado, and New York.

Perovskites are a broad class of materials characterized by the way atoms are arranged in their layered crystal lattice. These layers, described by convention as A, B, and X, can each consist of a variety of different atoms or compounds. So, searching through the entire universe of such combinations to find the best candidates to meet specific goals — longevity, efficiency, manufacturability, and availability of source materials — is a slow and painstaking process, and largely one without any map for guidance.

“If you consider even just three elements, the most common ones in perovskites that people sub in and out are on the A site of the perovskite crystal structure,” which can each easily be varied by 1-percent increments in their relative composition, Buonassisi says. “The number of steps becomes just preposterous. It becomes very, very large” and thus impractical to search through systematically. Each step involves the complex synthesis process of creating a new material and then testing its degradation, which even under accelerated aging conditions is a time-consuming process.

The key to the team’s success is what they describe as a data fusion approach. This iterative method uses an automated system to guide the production and testing of a variety of formulations, then uses machine learning to go through the results of those tests, combined again with first-principles physical modeling, to guide the next round of experiments. The system keeps repeating that process, refining the results each time.

Buonassisi likes to compare the vast realm of possible compositions to an ocean, and he says most researchers have stayed very close to the shores of known formulations that have achieved high efficiencies, for example, by tinkering just slightly with those atomic configurations. However, “once in a while, somebody makes a mistake or has a stroke of genius and departs from that and lands somewhere else in composition space, and hey, it works better! A happy bit of serendipity, and then everybody moves over there” in their research. “But it’s not usually a structured thought process.”

This new approach, he says, provides a way to explore far offshore areas in search of better properties, in a more systematic and efficient way. In their work so far, by synthesizing and testing less than 2 percent of the possible combinations among three components, the researchers were able to zero in on what seems to be the most durable formulation of a perovskite solar cell material found to date.

“This story is really about the fusion of all the different sets of tools” used to find the new formulation, says Sun, who coordinated the international team that carried out the work, including the development of a high-throughput automated degradation test system that monitors the breakdown of the material through its changes in color as it darkens. To confirm the results, the team went beyond making a tiny chip in the lab and incorporated the material into a working solar cell.

“Another point of this work is that we actually demonstrate, all the way from the chemical selection until we actually make a solar cell in the end,” she says. “And it tells us that the machine-learning-suggested chemical is not only stable in its own freestanding form. They can also be translated into real-life solar cells, and they lead to improved reliability.” Some of their lab-scale demonstrations achieved longevity as much as 17 times greater than the baseline formula they started with, but even the full-cell demonstration, which includes the necessary interconnections, outlasted the existing materials by more than three times, she says.

Buonassisi says the method the team developed could also be applied to other areas of materials research involving similarly large ranges of choice in composition. “It really opens the door for a mode of research where you can have these short, quick loops of innovation happening, maybe at a subcomponent or a material level. And then once you zero in on the right composition, you bump it up into a longer loop that involves device fabrication, and you test it out” at that next level.

“It’s one of the big promises of the field to be able to do this type of work,” he says. “To see it actually happen was one of those [highly memorable] moments. I remember the exact place I was when I received the call from Shijing about these results — when you start to actually see these ideas come to life. It was really stunning.”

“What is particularly exciting about [this] advance is that the authors use physics to guide the intuition of the [optimization] process, rather than limiting the search space with hard constraints,” says University Professor Edward Sargent of the University of Toronto, a specialist in nanotechnology who was not connected with this research. “This approach will see widespread exploitation as machine learning continues to move toward solving real problems in materials science.”

The team included researchers at MIT, the Helmholz Intitute in Germany, the Colorado School of Mines, Brookhaven National Laboratory in New York, the Singapore-MIT Alliance for Research and Technology, and the Institute of Materials for Electronics and Energy Technology in Erlangen, Germany. The work was supported by DARPA, Total SA, the National Science Foundation, and the Skoltech NGP program.