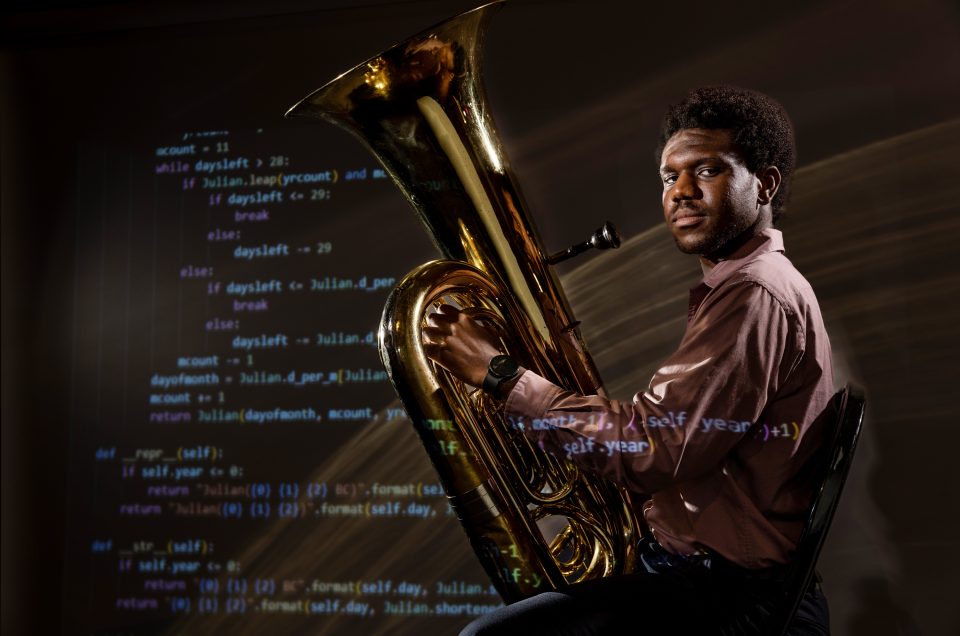 How does an ensemble play music together while apart? This was the question facing Frederick Ajisafe and the rest of the MIT Wind Ensemble (MITWE) at the start of the Covid-19 pandemic. One method was to individually record tracks that were later mixed together to sound like a full ensemble.

“It was a strange experience,” says Ajisafe, who plays the tuba and is pursuing a double major in aerospace engineering and music. “It wasn’t as cohesive as playing together in person, but the results are something to be proud of.”

Now that the group is able to rehearse in person once again, Ajisafe has a renewed appreciation for the community he has found within MITWE.

“As far as the togetherness of the ensemble, the intangible and social connections that we all have, I feel like we’re back in that sense,” he says. “The biggest difference is that I’m a senior. The last time we were together without masks, I was a freshman looking up to people, but now people are looking up to me.”

An accomplished musician, Ajisafe has been playing the tuba since middle school.

“In middle school, I heard a lot of things like ‘music makes you smarter,’ so I said, ‘okay, I want to be smarter,’ so I joined the band program,” says Ajisafe. “Something about my lip shape and my lung capacity was really good for the tuba.”

It was more than just a physical affinity for the instrument that kept Ajisafe playing; he also loved the social aspect of playing in an ensemble. Last year, he was accepted as an Emerson Scholar in tuba performance, receiving subsidized private lessons with renowned professional tuba player Ken Amis.

Ajisafe has also taken a variety of classes in MIT’s Music and Theater Arts section that cover a wide range of topics, from traditional theory to composition.

One of his favorite classes is 21M.361 (Electronic Music Composition), which teaches how to sample and manipulate sounds in different software. Some of the sounds Ajisafe sampled throughout the course of the class include snapping, clapping, playing a scale on his tuba, and slamming an object on the ground. Then, those sounds were fit to a score Ajisafe created for a previous assignment. He described the process as intellectually satisfying, as well as pushing the envelope in how he understands music.

“Most people probably wouldn’t call it music, but it has musical elements,” says Ajisafe. “It gives you a new perspective on the world.”

Ajisafe grew up in Orlando, Florida, and had a wide range of interests growing up.

“Whatever they were teaching in school, I was excited about,” he says. “I was always interested in words and things like that, but I was also interested in science and math.”

Growing up close to NASA’s Kennedy Space Center, it’s easy to see how Ajisafe cultivated an interest in aerospace.

But there was also a childhood participation in the local spelling bee that tickled his interest in words. Now, he’s working on a project, through MIT’s Undergraduate Research Opportunities Program, that combines linguistics, natural language processing, and aircraft design requirements.

One of the challenges of writing design requirements for aircraft is ambiguity, especially when the requirements are written in traditional, natural language form. More engineers are turning to model-based systems engineering standards, which is newer and more formalized. Ajisafe is tackling the problem of translating the original requirements into the newer form, specifically, putting together representative training data for a machine learning algorithm.

“I’m figuring out the more granular level to label these sorts of sentences to figure out if we could use a more automatic system using parts of speech,” Ajisafe explains. “For example, maybe you can devise a pattern that labels a noun at the beginning of a sentence as the entity important to systems engineers, like ‘the parachute shall deploy at this time’ — the parachute is the entity.”

Instead of converting every detail of the sentence to a system model, his team has determined that it’s effective to focus on labeling and extracting certain key elements.

The project combines many different skills that Ajisafe has picked up throughout his MIT career, all coming together in harmony to tackle a unique problem.

“I always want to see the next thing beyond”

Next year, Ajisafe plans to pursue his master’s degree through the Department of Aeronautics and Astronautics.

“Ultimately, I would like to be working with the technical problems related to space exploration and getting humanity to the stars,” says Ajisafe. “I don’t know exactly where I fit in that, but hopefully I can have a positive impact.”

And of course, like it’s been throughout his life, he wants to continue doing music, whether it be playing tuba or trying other outlets.

“For humanity to survive, it is good and maybe even necessary to seek out other places besides Earth,” Ajisafe says with regards to his career aspirations. But, it connects to how he approaches his personal life as well: “I always want to walk out somewhere I’ve never been before and be in a place that I’m completely unfamiliar with. I always want to see the next thing beyond.”