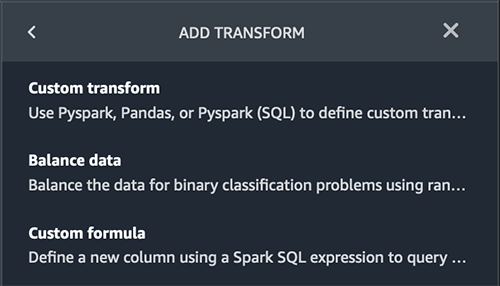 Amazon SageMaker Data Wrangler is a new capability of Amazon SageMaker that makes it faster for data scientists and engineers to prepare data for machine learning (ML) applications by using a visual interface. It contains over 300 built-in data transformations so you can quickly normalize, transform, and combine features without having to write any code.

Today, we’re excited to announce new transformations that allow you to balance your datasets easily and effectively for ML model training. We demonstrate how these transformations work in this post.

The newly announced balancing operators are grouped under the Balance data transform type in the ADD TRANFORM pane.

Currently, the transform operators support only binary classification problems. In binary classification problems, the classifier is tasked with classifying each sample to one of two classes. When the number of samples in the majority class (bigger) is considerably larger than the number of samples in the minority (smaller) class, the dataset is considered imbalanced. This skew is challenging for ML algorithms and classifiers because the training process tends to be biased towards the majority class.

Balancing schemes, which augment the data to be more balanced before training the classifier, were proposed to address this challenge. The simplest balancing methods are either oversampling the minority class by duplicating minority samples or undersampling the majority class by removing majority samples. The idea of adding synthetic minority samples to tabular data was first proposed in the Synthetic Minority Oversampling Technique (SMOTE), where synthetic minority samples are created by interpolating pairs of the original minority points. SMOTE and other balancing schemes were extensively studied empirically and shown to improve prediction performance in various scenarios, as per the publication To SMOTE, or not to SMOTE.

For example, consider two samples, A and B:

This example demonstrates how the interpolation process could result in unrealistic synthetic samples, such as an herbivore dog. This is more common with categorical features but can occur in numeric features as well. Even though some synthetic samples may be unrealistic, SMOTE could still improve classification performance.

Let’s now balance the Adult Dataset (also known as the Census Income dataset) using the built-in SMOTE transform provided by Data Wrangler. This multivariate dataset includes six numeric features and eight string features. The goal of the dataset is a binary classification task to predict whether the income of an individual exceeds $50,000 per year or not based on census data.

You can also see the distribution of the classes visually by creating a histogram using the histogram analysis type in Data Wrangler. The target distribution is imbalanced and the ratio of records with >50K to <=50K is about 1:4.

We can balance this data using the SMOTE operator found under the Balance Data transform in Data Wrangler with the following steps:

Choose income as the target column.

We want the distribution of this column to be more balanced.

Therefore, the ratio between the number of minority and majority samples is 2:3 (instead of the raw ratio of 1:4).

Choose SMOTE as the transform to use.
Leave the default values for Number of neighbors to average and whether or not to normalize.

Choose Preview to get a preview of the applied transformation and choose Add to add the transform to your data flow.

Now we can create a new histogram similar to what we did before to see the realigned distribution of the classes. The following figure shows the histogram of the income column after balancing the dataset. The distribution of samples is now 3:2, as was intended.

We can now export this new balanced data and train a classifier on it, which could yield superior prediction quality.

As next steps, we recommend you replicate the example in this post in your Data Wrangler data flow to see what we discussed in action. If you’re new to Data Wrangler or SageMaker Studio, refer to Get Started with Data Wrangler. If you have any questions related to this post, please add it in the comment section.

Yotam Elor is a Senior Applied Scientist at Amazon SageMaker. His research interests are in machine learning, particularly for tabular data.