AWS DeepRacer is the fastest way to get started with machine learning (ML). You can train reinforcement learning (RL) models by using a 1/18th scale autonomous vehicle in a cloud-based virtual simulator and compete for prizes and glory in the global AWS DeepRacer League. Today, we’re expanding AWS DeepRacer’s ability to provide fun, hands-on learning by open-sourcing the AWS DeepRacer device software.

The AWS DeepRacer virtual and in-person leagues have been a hit, but now developers want to go beyond league racing with their car. Because the AWS DeepRacer is an Ubuntu-based computer on wheels powered by the Robot Operating System (ROS) we are able to open source the code, making it straightforward for a developer with basic Linux coding skills to prototype new and interesting uses for their car. Now that the AWS DeepRacer device software is openly available, anyone with the car and an idea can make new uses for their device a reality.

We’ve compiled 6 sample projects from the AWS DeepRacer team and members of the global AWS DeepRacer community to help you get started exploring the possibilities that open source provides. As developers share new projects using #deepracerproject, we will highlight our favorites on the AWS DeepRacer robotics projects page. Whether you’re mounting a Nerf cannon on the car with the DeepBlaster project, creating visualizations of your home or office with the Mapping project, or coming up with new ways of racing your friends and colleagues with the DeepDriver project, you can do all that and more with the open source code and sample projects. Documentation is available in GitHub and open for collaboration with thousands of community members in the AWS DeepRacer Slack channel. The only limit to what you can do with AWS DeepRacer is your imagination (and, well, the laws of physics).

With the open-sourcing of the AWS DeepRacer device code, you can quickly and easily change the default behavior of your currently track-obsessed race car. Want to block other cars from overtaking it by deploying countermeasures? Want to deploy your own custom algorithm to make the car go faster from point A to B? You just need to dream it and code it. We can’t wait to see the ideas that you come up with, from new racing formats to new uses for AWS DeepRacer.

Starting today, you can choose from six projects (Follow the leader, Mapping, and Off Road created by AWS, and RoboCat, DeepBlaster, and DeepDriver created by the open source community) or create your own. You can get started with the Follow the Leader sample project, which trains the car to detect and follow an object. It’s the quickest project to build and run, and in the next section we’ll demonstrate how easy it is to modify the default the behavior of your AWS DeepRacer car. To complete this setup, upgrade to the latest software version and access the car via SSH.

Connect to the car using SSH, switch to the root user, and create a working directory. Then clone the Follow the Leader GitHub repository:

The process to fully clone the project repository to your car can take a few minutes (depending on the speed of your internet connection). The Follow the Leader project contains several installation scripts that help shortcut the process to get you up and running faster. You can also complete the next few steps manually if you’re more comfortable with running shell-based commands or want to learn more about the process using the links to the relevant documentation for each stage.

First, we need to download and convert the object detection model. To do this, we run the script that came in the Follow the Leader repository: 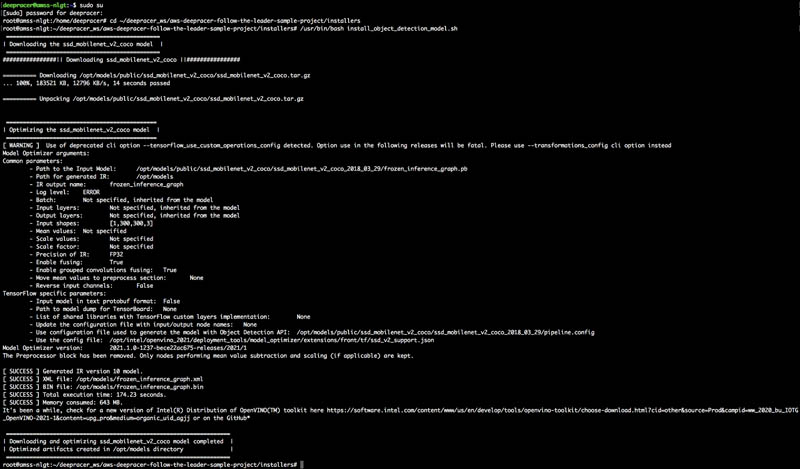 The installer script downloads and optimizes the model before copying the optimized artifacts to the model location. This process takes approximately 3–4 minutes to complete.

You can complete this stage manually using the detailed instructions to download and convert the object detection model.

Rosdep helps to install the dependency packages. Initialize the rosdep if it’s not done before on the device:

Next, we fetch the package dependencies needed for the project and build them:

When successful, you should see a screen similar to the following:

The script downloads and installs the required package dependencies and builds the packages. This process can take approximately 8–10 minutes to complete.

You can also complete this stage manually by following the steps 1–10 in “Download and Building” in the Follow the Leader README.md. The install script does the same steps (just saves you some typing).

Finally, we need to open another SSH session to the car to enable Follow the Leader mode using the command line interface (CLI): 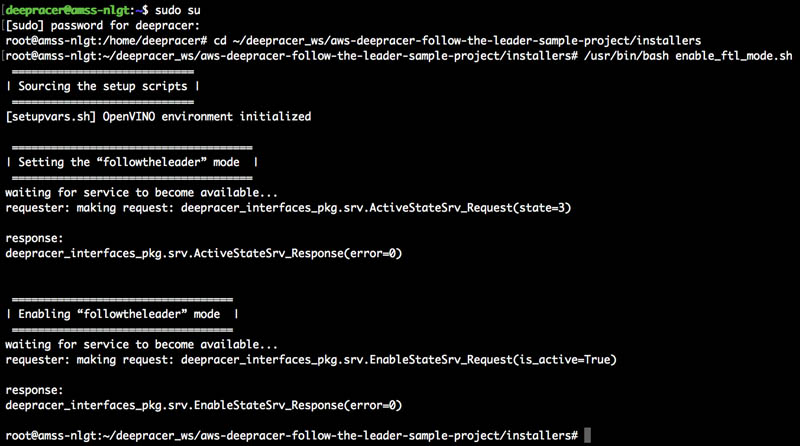 Now you, or a willing volunteer (or object), can move around and watch the car begin to follow! How cool is that?

Congratulations! You completed your first sample project. Share your experience with friends and family on social media with the tag #deepracerproject so we can see what you’re up to. As the community invents new projects for AWS DeepRacer, we’ll be adding them to the AWS DeepRacer GitHub Organization as well as featuring them in future blog posts so that everyone can get inspired. Purchase an AWS DeepRacer car today to start experimenting with your first AWS DeepRacer robotics project today! We are offering a 25% discount on the AWS DeepRacer ($100 off) and AWS DeepRacer Evo ($150 off) till May 27th, 2021.

David Smith is a Sr. Solutions Architect for AWS DeepRacer. He is passionate about AWS DeepRacer, technology as an enabler and learning. Outside of work he’s into Formula 1, flying (and crashing) drones, 3d printing, running (Parkrun), tinkering with code and spending time with the family.