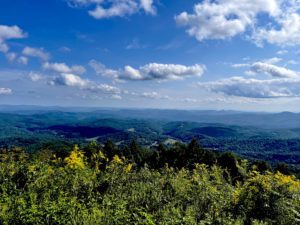 When it comes to sequential or time series data, traditional feedforward networks cannot be used for learning and prediction. A mechanism is required that can retain past or historic information to forecast the future values. Recurrent neural networks or RNNs for short are a variant of the conventional feedforward artificial neural networks that can deal with sequential data and can be trained to hold the knowledge about the past.

An Introduction To Recurrent Neural Networks And The Math That Powers Them. Photo by Mehreen Saeed, some rights reserved.

The working of an RNN

What is a Recurrent Neural Network

A recurrent neural network (RNN) is a special type of an artificial neural network adapted to work for time series data or data that involves sequences. Ordinary feed forward neural networks are only meant for data points, which are independent of each other. However, if we have data in a sequence such that one data point depends upon the previous data point, we need to modify the neural network to incorporate the dependencies between these data points. RNNs have the concept of ‘memory’ that helps them store the states or information of previous inputs to generate the next output of the sequence.

At every time step we can unfold the network for $k$ time steps to get the output at time step $k+1$. The unfolded network is very similar to the feedforward neural network. The rectangle in the unfolded network shows an operation taking place. So for example, with an activation function f:

Here, $cdot$ is the dot product.

We can use any activation function we like in the recurrent neural network. Common choices are:

The backpropagation algorithm of an artificial neural network is modified to include the unfolding in time to train the weights of the network. This algorithm is based on computing the gradient vector and is called back propagation in time or BPTT algorithm for short. The pseudo-code for training is given below. The value of $k$ can be selected by the user for training. In the pseudo-code below $p_t$ is the target value at time step t:

Repeat till stopping criterion is met:

There are different types of recurrent neural networks with varying architectures. Some examples are:

Here there is a single $(x_t, y_t)$ pair. Traditional neural networks employ a one to one architecture.

There are many possibilities for many to many. An example is shown above, where two inputs produce three outputs. Many to many networks are applied in machine translation, e.g, English to French or vice versa translation systems.

Advantages and Shortcomings Of RNNs

RNNs have various advantages such as:

The computation can be very slow.
The network does not take into account future inputs to make decisions.
Vanishing gradient problem, where the gradients used to compute the weight update may get very close to zero preventing the network from learning new weights. The deeper the network, the more pronounced is this problem.

There are different variations of RNNs that are being applied practically in machine learning problems:

In BRNN, inputs from future time steps are used to improve the accuracy of the network. It is like having knowledge of the first and last words of a sentence to predict the middle words.

These networks are designed to handle the vanishing gradient problem. They have a reset and update gate. These gates determine which information is to be retained for future predictions.

LSTMs were also designed to address the vanishing gradient problem in RNNs. LSTM use three gates called input, output and forget gate. Similar to GRU, these gates determine which information to retain.

In this tutorial, you discovered recurrent neural networks and their various architectures.

Do you have any questions about RNNs discussed in this post? Ask your questions in the comments below and I will do my best to answer.

The post An Introduction To Recurrent Neural Networks And The Math That Powers Them appeared first on Machine Learning Mastery.