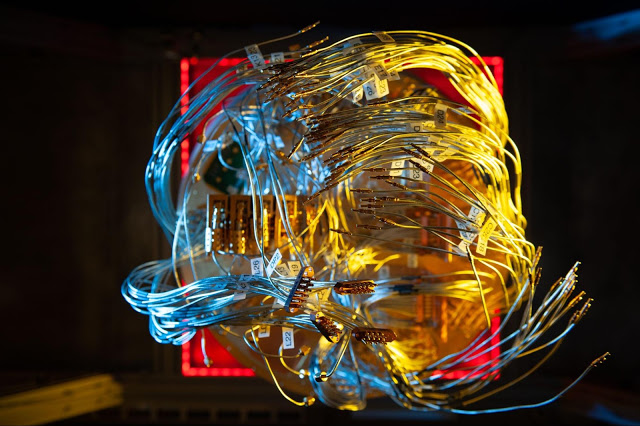 In fall of 2019, we demonstrated that the Sycamore quantum processor could outperform the most powerful classical computers when applied to a tailor-made problem. The next challenge is to extend this result to solve practical problems in materials science, chemistry and physics. But going beyond the capabilities of classical computers for these problems is challenging and will require new insights to achieve state-of-the-art accuracy. Generally, the difficulty in performing quantum simulations of such physical problems is rooted in the wave nature of quantum particles, where deviations in the initial setup, interference from the environment, or small errors in the calculations can lead to large deviations in the computational result.

In two upcoming publications, we outline a blueprint for achieving record levels of precision for the task of simulating quantum materials. In the first work, we consider one-dimensional systems, like thin wires, and demonstrate how to accurately compute electronic properties, such as current and conductance. In the second work, we show how to map the Fermi-Hubbard model, which describes interacting electrons, to a quantum processor in order to simulate important physical properties. These works take a significant step towards realizing our long-term goal of simulating more complex systems with practical applications, like batteries and pharmaceuticals.

A bottom view of one of the quantum dilution refrigerators during maintenance. During the operation, the microwave wires that are floating in this image are connected to the quantum processor, e.g., the Sycamore chip, bringing the temperature of the lowest stage to a few tens of milli-degrees above absolute zero temperature.

Computing Electronic Properties of Quantum Materials
In “Accurately computing electronic properties of a quantum ring”, to be published in Nature, we show how to reconstruct key electronic properties of quantum materials. The focus of this work is on one-dimensional conductors, which we simulate by forming a loop out of 18 qubits on the Sycamore processor in order to mimic a very narrow wire. We illustrate the underlying physics through a series of simple text-book experiments, starting with a computation of the “band-structure” of this wire, which describes the relationship between the energy and momentum of electrons in the metal. Understanding such structure is a key step in computing electronic properties such as current and conductance. Despite being an 18-qubit algorithm consisting of over 1,400 logical operations, a significant computational task for near-term devices, we are able to achieve a total error as low as 1%.

The key insight enabling this level of accuracy stems from robust properties of the Fourier transform. The quantum signal that we measure oscillates in time with a small number of frequencies. Taking a Fourier transform of this signal reveals peaks at the oscillation frequencies (in this case, the energy of electrons in the wire). While experimental imperfections affect the height of the observed peaks (corresponding to the strength of the oscillation), the center frequencies are robust to these errors. On the other hand, the center frequencies are especially sensitive to the physical properties of the wire that we hope to study (e.g., revealing small disorders in the local electric field felt by the electrons). The essence of our work is that studying quantum signals in the Fourier domain enables robust protection against experimental errors while providing a sensitive probe of the underlying quantum system.

(Left) Schematic of the 54-qubit quantum processor, Sycamore. Qubits are shown as gray crosses and tunable couplers as blue squares. Eighteen of the qubits are isolated to form a ring. (Middle) Fourier transform of the measured quantum signal. Peaks in the Fourier spectrum correspond to the energy of electrons in the ring. Each peak can be associated with a traveling wave that has fixed momentum. (Right) The center frequency of each peak (corresponding to the energy of electrons in the wire) is plotted versus the peak index (corresponding to the momentum). The measured relationship between energy and momentum is referred to as the ‘band structure’ of the quantum wire and provides valuable information about electronic properties of the material, such as current and conductance.

Quantum Simulation of the Fermi-Hubbard Model
In “Observation of separated dynamics of charge and spin in the Fermi-Hubbard model”, we focus on the dynamics of interacting electrons. Interactions between particles give rise to novel phenomena such as high temperature superconductivity and spin-charge separation. The simplest model that captures this behavior is known as the Fermi-Hubbard model. In materials such as metals, the atomic nuclei form a crystalline lattice and electrons hop from lattice site to lattice site carrying electrical current. In order to accurately model these systems, it is necessary to include the repulsion that electrons feel when getting close to one another. The Fermi-Hubbard model captures this physics with two simple parameters that describe the hopping rate (J) and the repulsion strength (U).

We realize the dynamics of this model by mapping the two physical parameters to logical operations on the qubits of the processor. Using these operations, we simulate a state of the electrons where both the electron charge and spin densities are peaked near the center of the qubit array. As the system evolves, the charge and spin densities spread at different rates due to the strong correlations between electrons. Our results provide an intuitive picture of interacting electrons and serve as a benchmark for simulating quantum materials with superconducting qubits.

(Left top) Illustration of the one-dimensional Fermi-Hubbard model in a periodic potential. Electrons are shown in blue, with their spin indicated by the connected arrow. J, the distance between troughs in the electric potential field, reflects the “hopping” rate, i.e., the rate at which electrons transition from one trough in the potential to another, and U, the amplitude, represents the strength of repulsion between electrons. (Left bottom) The simulation of the model on a qubit ladder, where each qubit (square) represents a fermionic state with spin-up or spin-down (arrows). (Right) Time evolution of the model reveals separated spreading rates of charge and spin. Points and solid lines represent experimental and numerical exact results, respectively. At t = 0, the charge and spin densities are peaked at the middle sites. At later times, the charge density spreads and reaches the boundaries faster than the spin density.

Conclusion
Quantum processors hold the promise to solve computationally hard tasks beyond the capability of classical approaches. However, in order for these engineered platforms to be considered as serious contenders, they must offer computational accuracy beyond the current state-of-the-art classical methods. In our first experiment, we demonstrate an unprecedented level of accuracy in simulating simple materials, and in our second experiment, we show how to embed realistic models of interacting electrons into a quantum processor. It is our hope that these experimental results help progress the goal of moving beyond the classical computing horizon.