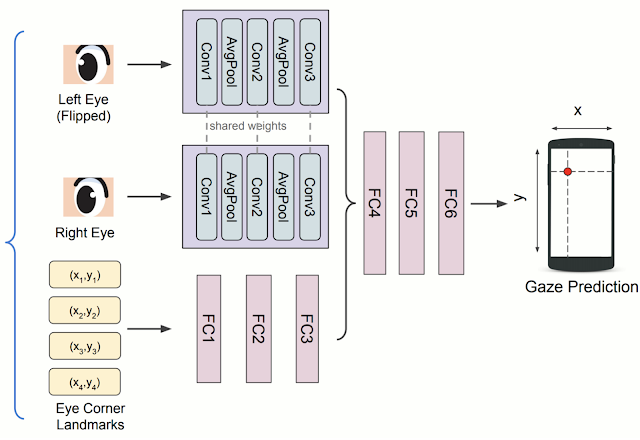 Eye movement has been studied widely across vision science, language, and usability since the 1970s. Beyond basic research, a better understanding of eye movement could be useful in a wide variety of applications, ranging across usability and user experience research, gaming, driving, and gaze-based interaction for accessibility to healthcare. However, progress has been limited because most prior research has focused on specialized hardware-based eye trackers that are expensive and do not easily scale.

In “Accelerating eye movement research via accurate and affordable smartphone eye tracking”, published in Nature Communications, and “Digital biomarker of mental fatigue”, published in npj Digital Medicine, we present accurate, smartphone-based, ML-powered eye tracking that has the potential to unlock new research into applications across the fields of vision, accessibility, healthcare, and wellness, while additionally providing orders-of-magnitude scaling across diverse populations in the world, all using the front-facing camera on a smartphone. We also discuss the potential use of this technology as a digital biomarker of mental fatigue, which can be useful for improved wellness.

Model Overview
The core of our gaze model was a multilayer feed-forward convolutional neural network (ConvNet) trained on the MIT GazeCapture dataset. A face detection algorithm selected the face region with associated eye corner landmarks, which were used to crop the images down to the eye region alone. These cropped frames were fed through two identical ConvNet towers with shared weights. Each convolutional layer was followed by an average pooling layer. Eye corner landmarks were combined with the output of the two towers through fully connected layers. Rectified Linear Units (ReLUs) were used for all layers except the final fully connected output layer (FC6), which had no activation.

Architecture of the unpersonalized gaze model. Eye regions, extracted from a front-facing camera image, serve as input into a convolutional neural network. Fully-connected (FC) layers combine the output with eye corner landmarks to infer gaze x- and y-locations on screen via a multi-regression output layer.

The unpersonalized gaze model accuracy was improved by fine-tuning and per-participant personalization. For the latter, a lightweight regression model was fitted to the model’s penultimate ReLU layer and participant-specific data.

Model Evaluation
To evaluate the model, we collected data from consenting study participants as they viewed dots that appeared at random locations on a blank screen. The model error was computed as the distance (in cm) between the stimulus location and model prediction. Results show that while the unpersonalized model has high error, personalization with ~30s of calibration data led to an over fourfold error reduction (from 1.92 to 0.46cm). At a viewing distance of 25-40 cm, this corresponds to 0.6-1° accuracy, a significant improvement over the 2.4-3° reported in previous work [1, 2].

Additional experiments show that the smartphone eye tracker model’s accuracy is comparable to state-of-the-art wearable eye trackers both when the phone is placed on a device stand, as well as when users hold the phone freely in their hand in a near frontal headpose. In contrast to specialized eye tracking hardware with multiple infrared cameras close to each eye, running our gaze model using a smartphone’s single front-facing RGB camera is significantly more cost effective (~100x cheaper) and scalable.

Using this smartphone technology, we were able to replicate key findings from prior eye movement research in neuroscience and psychology, including standard oculomotor tasks (to understand basic visual functioning in the brain) and natural image understanding. For example, in a simple prosaccade task, which tests a person’s ability to quickly move their eyes towards a stimulus that appears on the screen, we found that the average saccade latency (time to move the eyes) matches prior work for basic visual health (210ms versus 200-250ms). In controlled visual search tasks, we were able to replicate key findings, such as the effect of target saliency and clutter on eye movements.

For complex stimuli, such as natural images, we found that the gaze distribution (computed by aggregating gaze positions across all participants) from our smartphone eye tracker are similar to those obtained from bulky, expensive eye trackers that used highly controlled settings, such as laboratory chin rest systems. While the smartphone-based gaze heatmaps have a broader distribution (i.e., they appear more “blurred”) than hardware-based eye trackers, they are highly correlated both at the pixel level (r = 0.74) and object level (r = 0.90). These results suggest that this technology could be used to scale gaze analysis for complex stimuli such as natural and medical images (e.g., radiologists viewing MRI/PET scans).

Similar gaze distribution from our smartphone approach vs. a more expensive (100x) eye tracker (from the OSIE dataset).

Digital Biomarker of Mental Fatigue
Gaze detection is an important tool to detect alertness and wellbeing, and is studied widely in medicine, sleep research, and mission-critical settings such as medical surgeries, aviation safety, etc. However, existing fatigue tests are subjective and often time-consuming. In our recent paper published in npj Digital Medicine, we demonstrated that smartphone gaze is significantly impaired with mental fatigue, and can be used to track the onset and progression of fatigue.

A simple model predicts mental fatigue reliably using just a few minutes of gaze data from participants performing a task. We validated these findings in two different experiments — using a language-independent object-tracking task and a language-dependent proofreading task. As shown below, in the object-tracking task, participants’ gaze initially follows the object’s circular trajectory, but under fatigue, their gaze shows high errors and deviations. Given the pervasiveness of phones, these results suggest that smartphone-based gaze could provide a scalable, digital biomarker of mental fatigue.

Example gaze scanpaths for a participant with no fatigue (left) versus with mental fatigue (right) as they track an object following a circular trajectory.The corresponding progression of fatigue scores (ground truth) and model prediction as a function of time on task.

Beyond wellness, smartphone gaze could also provide a digital phenotype for screening or monitoring health conditions such as autism spectrum disorder, dyslexia, concussion and more. This could enable timely and early interventions, especially for countries with limited access to healthcare services.

Another area that could benefit tremendously is accessibility. People with conditions such as ALS, locked-in syndrome and stroke have impaired speech and motor ability. Smartphone gaze could provide a powerful way to make daily tasks easier by using gaze for interaction, as recently demonstrated with Look to Speak.

Ethical Considerations
Gaze research needs careful consideration, including being mindful of the correct use of such technology — applications should obtain explicit approval and fully informed consent from users for the specific task at hand. In our work, all data was collected for research purposes with users’ explicit approval and consent. In addition, users were allowed to opt out at any point and request their data to be deleted. We continue to research additional ways to ensure ML fairness and improve the accuracy and robustness of gaze technology across demographics, in a responsible, privacy-preserving way.

Conclusion
Our findings of accurate and affordable ML-powered smartphone eye tracking offer the potential for orders-of-magnitude scaling of eye movement research across disciplines (e.g., neuroscience, psychology and human-computer interaction). They unlock potential new applications for societal good, such as gaze-based interaction for accessibility, and smartphone-based screening and monitoring tools for wellness and healthcare.

Acknowledgements
This work involved collaborative efforts from a multidisciplinary team of software engineers, researchers, and cross-functional contributors. We’d like to thank all the co-authors of the papers, including our team members, Junfeng He, Na Dai, Pingmei Xu, Venky Ramachandran; interns, Ethan Steinberg, Kantwon Rogers, Li Guo, and Vincent Tseng; collaborators, Tanzeem Choudhury; and UXRs: Mina Shojaeizadeh, Preeti Talwai, and Ran Tao. We’d also like to thank Tomer Shekel, Gaurav Nemade, and Reena Lee for their contributions to this project, and Vidhya Navalpakkam for her technical leadership in initiating and overseeing this body of work.