A Gentle Introduction To Partial Derivatives and Gradient Vectors 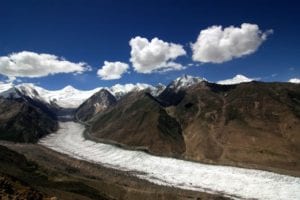 In this tutorial, you will discover partial derivatives and the gradient vector.

A Gentle Introduction To Partial Derivatives and Gradient Vectors. A photo by Atif Gulzar, some rights reserved.

What does the gradient vector represent

A Function of Several Variables

A function of several variables has the following properties:

For example, the following is a function of two variables (n=2):

In the above function x and y are the independent variables. Their sum determines the value of the function. The domain of this function is the set of all points on the XY cartesian plane. The plot of this function would require plotting in the 3D space, with two axes for input points (x,y) and the third representing the values of f.

Level Sets and Graph of a Function of Two Variables

The set of points in a plane, where a function f(x,y) has a constant value, i.e., f(x,y)=c is the level set or level curve of f.

As an example, for function f_1, all (x,y) points that satisfy the equation below define a level set for f_1:

In general, all level sets of f_1 define straight lines of the form (c is any real constant):

Similarly, for function f_2, an example of a level set is:

We can see that any point that lies on a circle of radius 1 with center at (0,0) satisfies the above expression. Hence, this level set consists of all points that lie on this circle. Similarly, any level set of f_2 satisfies the following expression (c is any real constant >= 0):

Hence, all level sets of f_2 are circles with center at (0,0), each level set having its own radius.

The functions f_1 and f_2 and their corresponding contours

Contours of a Function of Two Variables

Suppose we have a function f(x,y) of two variables. If we cut the surface z=f(x,y) using a plane z=c, then we get the set of all points that satisfy f(x,y) = c. The contour curve is the set of points that satisfy f(x,y)=c, in the plane z=c. This is slightly different from the level set, where the level curve is directly defined in the XY plane. However, many books treat contours and level curves as the same.

The contours of both f_1 and f_2 are shown in the above figure (right side).

The partial derivative of a function f w.r.t. the variable x is denoted by ∂f/∂x. Its expression can be determined by differentiating f w.r.t. x. For example for the functions f_1 and f_2, we have:

Similar is the case for ∂f/∂y. It represents the rate of change of f w.r.t y. You can look at the formal definition of partial derivatives in this tutorial.

When we find the partial derivatives w.r.t all independent variables, we end up with a vector. This vector is called the gradient vector of f denoted by ∇f(x,y). A general expression for the gradients of f_1 and f_2 are given by (here i,j are unit vectors parallel to the coordinate axis):

From the general expression of the gradient, we can evaluate the gradient at different points in space. In case of f_1 the gradient vector is a constant, i.e.,

No matter where we are in the three dimensional space, the direction and magnitude of the gradient vector remains unchanged.

What Does the Gradient Vector At a Point Indicate?

The gradient vector of a function of several variables at any point denotes the direction of maximum rate of change.

The gradient vector, on the other hand, is normal to the tangent line and points to the direction of maximum rate of increase. If we walk along the direction of the gradient we’ll start encountering the next point where the function’s value would be greater than the previous one.

The contours and the direction of gradient vectors

Why Is The Gradient Vector Important In Machine Learning?

The gradient vector is very important and used frequently in machine learning algorithms. In classification and regression problems, we normally define the mean square error function. Following the negative direction of the gradient of this function will lead us to finding the point where this function has a minimum value.

Similar is the case for functions, where maximizing them leads to achieving maximum accuracy. In this case we’ll follow the direction of the maximum rate of increase of this function or the positive direction of the gradient vector.

In this tutorial, you discovered what are functions of several variables, partial derivatives and the gradient vector. Specifically, you learned: